The NBA certainly chose wisely as it returns, when it scheduled these four teams to open the 2020-21 season, because circumstances conspired to make Warriors vs. Nets (7 ET, TNT) and Lakers vs. Clippers (10 ET, TNT) the most intriguing matchups in what promises to be a most intriguing season.

Last we saw the Warriors, their starting lineup was Andrew Wiggins, Marquese Criss, Mychal Mulder, Damion Lee and Juan Toscano-Anderson. They lost by 24 to the Clippers and dropped to 15-50, worst in the NBA.

Last we saw the Nets, they surrendered 150 points to the Raptors, getting swept from the first round while their two best players with a combined 16 All-Star appearances watched from home.

Last we saw the Clippers, they limped out of the playoffs, suffering from a fractured ego after blowing a 3-1 lead to the Nuggets. Their coach was Doc Rivers, though not for long.

And last we saw the Lakers, they danced in a rain of purple-and-gold confetti and LeBron James left the Orlando bubble with some priceless hardware: championship trophy, championship MVP trophy.

The hook for these two games is succulent and straightforward and contains the following: Long-anticipated franchise player comebacks, simmering rivalry, winds of change, heart of a champion, a touch of desperation, a 17th banner for Staples Center and, of course, superstars galore.

And this is just the start of a 72-game schedule that will bring the usual surprises and drama. Now that the preseason countdown is over, let’s count the number of subplots on display Tuesday night when the NBA opens for business in Brooklyn and Los Angeles:

The return of Kevin Durant. The league will welcome back a transcendent player who’s been missing since the 2019 NBA Finals following Achilles surgery. The injury isn’t a career-killer, thanks to modern medical science. Now we get to see how much, if anything, he lost in the process. 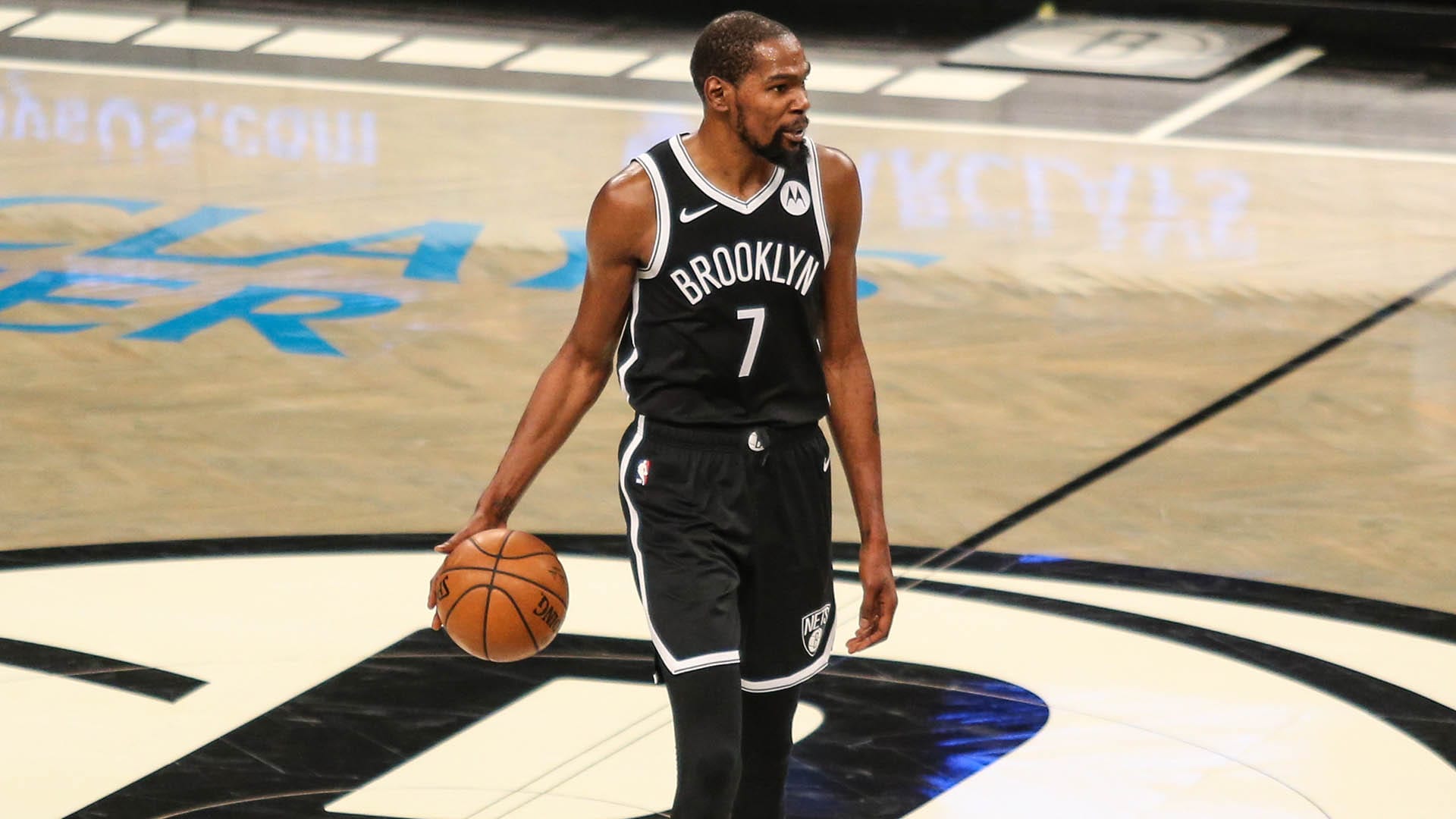 His appearance in the preseason suggests KD is virtually the same lethal scorer as before, and besides, the motivation to play can only help the former Kia MVP. That, and the chance to lead a third team to the NBA Finals should compel Durant to reclaim his spot among the game’s best players.

“I keep telling him he’s got to give himself 15 games before he starts judging himself,” rookie Nets coach Steve Nash said. “He’s gotta give himself 15-20 games. There’s no way to finalize what he is, who he is, without playing NBA games. (But) I think he’s going to be 100% Kevin Durant.”

KD vs. the championship team he bailed on. Rather than stay with a dynasty and remain teammates with Steph Curry, Durant traveled his own path and left for Brooklyn. Not many players would do that, but Durant isn’t most players. He’s his own man, and now he has his own team.

Whether he can have his own city — New York has been claimed by only a precious few sports icons — remains to be seen, especially with a franchise that, based on historical connection and popularity, cannot compare to the Knicks. He’s missed in the Bay Area but only from a talent standpoint. Yes, KD helped the Warriors win two titles and advance to three NBA Finals in his three years in town, but he was just passing through. The Warriors belong to Curry, the home-grown star.

“There’s no narrative at all,” Durant said. “It’s just a regular basketball game. I don’t care too much about that drama that comes with that former team, all that stuff. I’ve been through that with OKC, so I’m not trying to do that with Golden State. I love everybody there. It’s just another game.”

The KD-Kyrie connection. They plotted this collaboration months before making it official, but those plans were put on hold because of KD’s injury. Now, the process begins: KD and Kyrie Irving, a pair of quirky stars who played major roles in previous championship victories with other teams and other superstar teammates.

Both players are elite at shot creation and shot making, and can change any game, and are trusted with the ball in clutch moments. Together they make for high entertainment, and perhaps high drama as well depending on what mood Kyrie adopts on any given day.

“Me and [Durant] have a great relationship,” Irving said, “but our synergy carries over to everyone else and we allow each other to teach, to learn. We had to wait a year and a half and it came to fruition. Our greatness is even better together.”

Steph Curry and the burden he carries. Discounting his two-week cameo last season, Curry hasn’t played a meaningful game since the summer of 2019. And now he must do so without KD and also Klay Thompson, who followed knee surgery with an Achilles injury and will miss a second straight season.

This puts Curry on an island; not since his first few years with the Warriors has Curry lacked an All-Star scoring partner. There will be nights when he’ll be asked to drop 40 points, and what’s scary is Curry is still capable of that. He’s a two-time MVP who’ll need to return to that level if the Warriors insist on being on the upper-shelf in the West.

“For what we have right now, I love where we’re at,” Curry said. “I love the fact that we have enough pieces, enough talent and enough experience to surprise a lot of people this year and try to compete at the top of the West. We’ll see what happens.”

James Wiseman and the extinction of the big man. For better or worse, the seismic shift from post play to perimeter play has drastically reduced the value of the big man. This much is true, with one caveat: A great big man (Joel Embiid, Nikola Jokic for instance) still holds lots of weight. His role remains in the paint, but he must at least be a threat from the outside. Wiseman can be that player.

The No. 2 overall pick is raw and, until he develops, will do much of his damage for the Warriors near the rim. The good news for the 7-foot teenager is he’s joining a good team, which rarely happens with players selected that high. He’ll get his first NBA taste against DeAndre Jordan.

“I think one of the most exciting things for us about James is his intelligence, his willingness to learn and his ability to absorb lessons,” Warriors coach Steve Kerr said. “But I will again reiterate: It’s one thing to scrimmage and it’s another thing to be out on the floor against Kevin Durant, Kyrie Irving and the Brooklyn Nets. We have to temper our expectations and bring him along at a pace that will allow him to develop well.”

Andrew Wiggins gets a second chance to make a first impression. Wiggins is trying to escape a perception he helped create: A good player paid like he’s great who still hasn’t reached his potential, takes nights off, lacks intensity and is mainly a tease.

Well, anyone on a team with Draymond Green will bust tail, or else. Plus, give Wiggins the benefit of the doubt for being older and wiser and, now that he’s finally with a winner, better motivated by his surroundings. The Warriors are pleased by what they see thus far, even more if he plays well against KD.

Paul George is ready to make amends. George is one of the few humans who took a trip to Disney and came away with a bad experience from start to finish.

He wasn’t the only reason the Clippers played poorly and finally collapsed in the second round of the bubble playoffs, but he was the symbol of that failure, shooting poorly throughout and especially in the Game 7 moment of truth against Denver. Then, months later, he signed a kind of mega extension with the Clippers that’s usually given as a reward for a job well done. George is suddenly the rare star who has lots of prove. The national spotlight on him, starting with the season opener, will be severe.

Kawhi Leonard wants to prove he made the right call. This probably isn’t the right time to remind Kawhi he could’ve signed with the Lakers last year and would most likely have another championship ring right now. Instead, he’s steering the wobbly Clipper Ship, fresh off a postseason embarrassment.

Kawhi remains a terrific two-way player, yet for a team that begs for leadership from its best player, he can’t deliver, at least not vocally; it’s not his style. This season will reflect on him, one way or another, and if it finishes much like last season, at least Kawhi hasn’t signed that contract extension yet. And until he does, there’s still time to join the Lakers if he so pleases next season.

The Clippers and the uncomfortable ring ceremony. As if the Clippers need any further reminders of how rotten last year ended, they must endure the spectacle of the Lakers raising another banner to the ceiling in an area they share. Meanwhile, there’s still no Clippers championship. At least they made changes perhaps for the better, with Serge Ibaka the most decorated of the offseason additions. It’s now Ty Lue’s turn to do what Doc Rivers couldn’t: Help the Clippers finally get championship credibility.

George said the opener against the Lakers “won’t be the test of finding who we are, where we’re at. It’s the start of a marathon.”

LeBron James is still King until further notice. Season No. 17 finds LeBron a better 3-point shooter, better passer, more willing defender and still an efficient player. Also, he’s an NBA champion coming off a stellar postseason. There is much pride in being nearly 36 and still on a high level and being the idol of teenage rookies who first picked up a basketball because of him. The goals from here are simple: Match or pass Michael Jordan for championships won and stick around long enough for when and if his oldest son Bronny arrives in the league.

A new cast awaits the Lakers. Armed with few assets but plenty of cap space and a pair of aces, the Lakers made the most of their offseason, and more, by upgrading at nearly every position. The only questionable move was Marc Gasol at center; he’s almost out of gas. Otherwise: Dennis Schroder, Wesley Matthews and Montrezl Harrell are replacing Rajon Rondo, Danny Green and JaVale McGee. Plus, it might be Talen Horton-Tucker’s turn in the rotation.

Anthony Davis is nobody’s second option. If there were any questions about AD before he arrived with the Lakers, they’ve been effectively squashed. He was a force on a team that won a title; nothing else needs to be said or proven. And there were times when he was the best player on a floor shared with LeBron.

AD’s ability to defend and shut down multiple positions and also have a major impact offensively puts him on an island shared by only Giannis Antetokounmpo. When the Lakers meet the Clippers in the opener, you will see the difference between the “No. 2s.”

“I want to win at the highest level, and AD wants to do the same,” James said. “He wants to be one of the best, and we know that championships are the holy grail in this league. To be crowned a champion, to become multiple champions, that’s what it’s all about.”